The Elder Scrolls V: Skyrim and the Super Nintendo aren’t two things we often put in the same conversation, but when 81monkeys Kickstarter project is involved, there’s no better pairing or comparison. World of Anterra is a beautiful open-world RPG inspired by Bethesda’s mammoth title, and it promises an “endlessly-explorable world” but in a rather lovely pixel form.

The game’s Kickstarter launched a few weeks ago, and now the project is fully funded with (at the time of writing) 18 days to go, so there’s still plenty of time to unlock stretch goals. Nicely, the developer says that everything it plans to put in World of Anterra will be in the game when it launches, so these goals won’t be for new content or unlocking planned content, but rather some fun little backer rewards. The team has been hard at work on the game for over three years and is hoping to release the game on PC, Mac, and consoles in 2023.

We haven’t seen many open-world pixel RPGs, and one other unique twist World of Anterra promises is related to party-based combat. The game will use a streamlined grid-based system that combined button-based action RPG combat with extra strategy. Your button press will cause the character to move and attack in the same motion, or you can walk your character to a better spot on the ‘grid’ before you choose to attack! 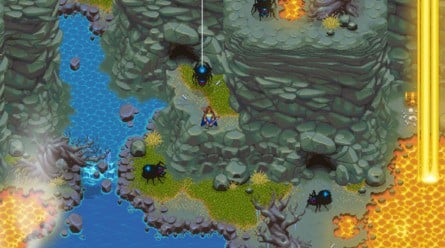 81monkeys has already come up with extensive lore and promises snappy dialogue with a refined and modernised, but with clear inspirations from genre classic Ultimate. And Anterra will exist in real-time, so the day and night will only stop if you pause the game.

We could go on for days about how sprawling this pixelated adventure is, but, 81monkeys has summarized some promised key features coming to World of Anterra on its Kickstarter page, and we’ve shared them here:

– A diverse and living world. Explore a vast world with oceans, continents, regions, castles and towns, mountains, caves and dungeons. Anterra is full of life, from little insects to hulking creatures. NPCs live out their lives following daily routines, while also responding dynamically to events in the world, as well as the player. World of Anterra is built to be explored freely and at your own pace.
–Deep and inspiring non-linear story. The story and quests follow non-linear, divergent paths, so you can go where you want and talk to whomever you’d like. Your story will unfold naturally, based on the paths you choose to follow.
– Conversational dialog. A unique way to converse with NPCs that allows players to have a more conversational experience with every character in the game. We ditched the overly wordy, linear dialogue experiences of modern games and designed a completely new, retro-inspired system.
– Fast and fluid party-based combat. Leveraging our vast experience across many genres of gaming, including casual and social games, combat is designed to be fun no matter how many hours you put in, with streamlined UI and engaging feedback.
– Satisfying and accessible user interface. Our design skills really shine here! We have designed an interface with the least amount of “UI” and words as possible. Instead of menus and lists, we leveraged true-to-our-world items and intuitive icons to create a wonderful user experience. Our interface is so much fun, it could be a game on its own!

Okay, we want to play this, curled up on the sofa with a mug of something warm right now. But we’ll have to wait until next fall/winter, as World of Anterra is due to come out in 2023.

What do you think of this Kickstarter project? Will you be picking up World of Anterra? Adventure on down to the comments and let us know!